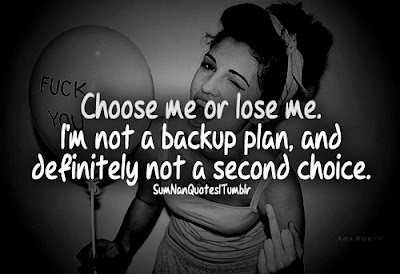 Last night I ended up being a little beside myself from my night with Mr. Wonderful. I think he friend zoned me, but all the while his actions just showed me that he really is not worth my time and definitely does not live up to the nickname of “Mr. Wonderful”. The 10 things I will discuss is just exactly what he did to completely turn me off and I will not see him again {except at work because we work together, but that’s a wrap}.
If you don’t want to date me DO the following:

1. Start texting on your phone while I’m with you.
I told him to get off his phone and stop Facebooking, Instagramming, texting. All of which he claims he does not do, even texting. I told him he texted me right before we met up and he said he didn’t text me. Yeah okay buddy, it’s all in my head.

2. Talk about some lady you met on the plane two weeks ago and how you were supposed to meet up with her last night, but you flaked on her and rescheduled for this weekend.
Newsflash, I do not need to know that!

3. Ask me what I’m doing the rest of my evening and don’t offer to hang out some more.
If you don’t plan on being part of my plans, just don’t ask.

4. Doesn’t know how to accept a gesture and demands a certain action out of me.
While we were eating he had a crumb on his face and I wiped it off with my hand and he told me to get a napkin, he said it twice and I didn’t do it because I’m thinking I was doing him a favor and that’s the thanks I get. No one tells me what to do, you ain’t my daddy!

5. Keep looking at your phone to see if you got a text.
I’m sorry that it seems you are preoccupied and you rather be elsewhere with whoever you are expecting to hear from.

6. Ask me if I’m dating someone.
That is none of your business to be asking me this question. I asked him why is he asking me that and he said he’s curious. I told him “There’s always guys, they’re like bus stops, one goes and another one arrives“. He said he’s never heard a girl respond with that before. I corrected him by saying, “I’m not a girl, I’m a woman“.

7. Order yourself a second drink and don’t ask me if I want another drink.
To me, that’s just rude to invite someone out for drinks and you don’t ask them or offer another drink.

8. Talk about your weekend and how you’re going to go out and do this and that. Then ask me what am I doing.
Kind of ties with #3; I told him my weekend will probably consist of relaxing on my couch again with my vino.

9. Looking at your phone again.

10. Don’t walk me to my car.
I can’t believe this happened, but as we were both walking out he walks to his car and doesn’t bother to walk me to my car and says “See ya!“. Hahahahaha! Wow! Douche bag status for Mr. Wonderful tipped the scale, it went on overdrive.

It’s these kinds of things that makes me thankful that I have a good guy I am dating. Pedro is a real man and would never treat me like this. Mr. Wonderful is a boy and doesn’t know how to act like a man, so I really can’t expect much from him. In fact, he’s not Mr. Wonderful, he is Mr. Immature. At the end of the night, the conversation got really quiet and I even asked him “Are you mad at me?” and he literally took 3 seconds to answer and he says, “No“. I know he’s lying, something was bothering him and I’m not sure what was up. Either way, I’m glad that it only took one week to figure out this guy is not for me and he did the 10 steps above to not date me. I don’t have to worry anymore about kissing an ashtray. I’m just so thankful.